ARTICLES
Xorbits Internals - Part1: Why Xorbits is the best choice of data analysis

This series of blog posts will explain why Xorbits is better and how it works. The initial post will provide an overview of designs and internals of Xorbits, to help you quickly understand Xorbits. 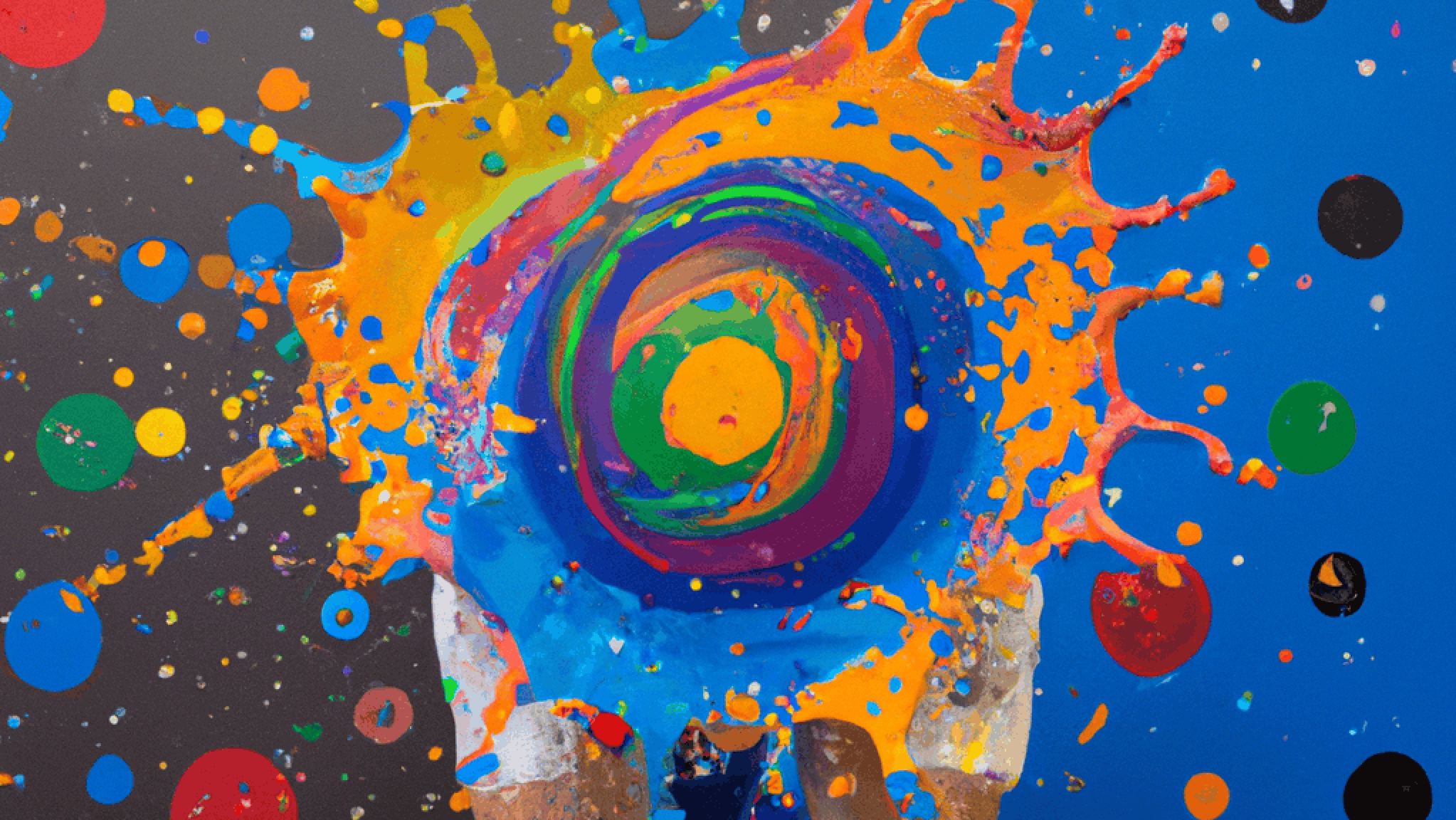 In the world of data science, Pandas is the most popular and widely used Python library for data science, Numpy is the fundamental package for scientific computing with Python and Scikit-learn is the most useful and robust library for machine learning in Python. However, as the amount of data continues to grow, it becomes increasingly difficult for data scientists to process millions or billions of data using these libraries, especially when data volume exceeds the memory capacity of a single machine. Xorbits was created to address this challenge, providing a solution for scaling and accelerating data science workloads, including, but not limited to, those utilizing the aforementioned libraries.

This series of blog posts will explain why Xorbits is better and how Xorbits works. As the first in this series, this article provides the overview of Xorbits internals and designs.

This is the first thing to be considered when Xorbits was created. The user communities of Pandas, Numpy and Scikit-learn have proved that easy-to-use is one of the most important things of making a choice, Xorbits has put many efforts in boosting your Python code at the least cost.

Users would know how to use Xorbits as long as you know how to use Numpy, Pandas and so forth. Xorbits APIs are compatible with existing data science libraries, data engineers don’t have to learn new knowledge, and it becomes so seamless to scale your Pandas or Numpy codes.

From local validation on a small scale to analysis on a large scale, Xorbits doesn’t need to rewrite your Python code or translate it into other languages like SQL, it makes you focus on data itself not on tools.

Here are Xorbits APIs implemented or planned include:

Eager evaluation means expression is evaluated as soon as it is encountered whereas lazy evaluation refers to evaluation of an expression when needed, it’s always a hard choice for any computing framework. From a performance perspective, lazy evaluation is a better choice because it allows for more optimizations, but it requires the users to explicitly specify when to trigger execution. In comparison, eager mode is more intuitive for users and is consistent with the behavior of existing libraries including Numpy and Pandas. So Xorbits chooses deferred mode, it delays the evaluation until its value is needed, but does not require users to specify. 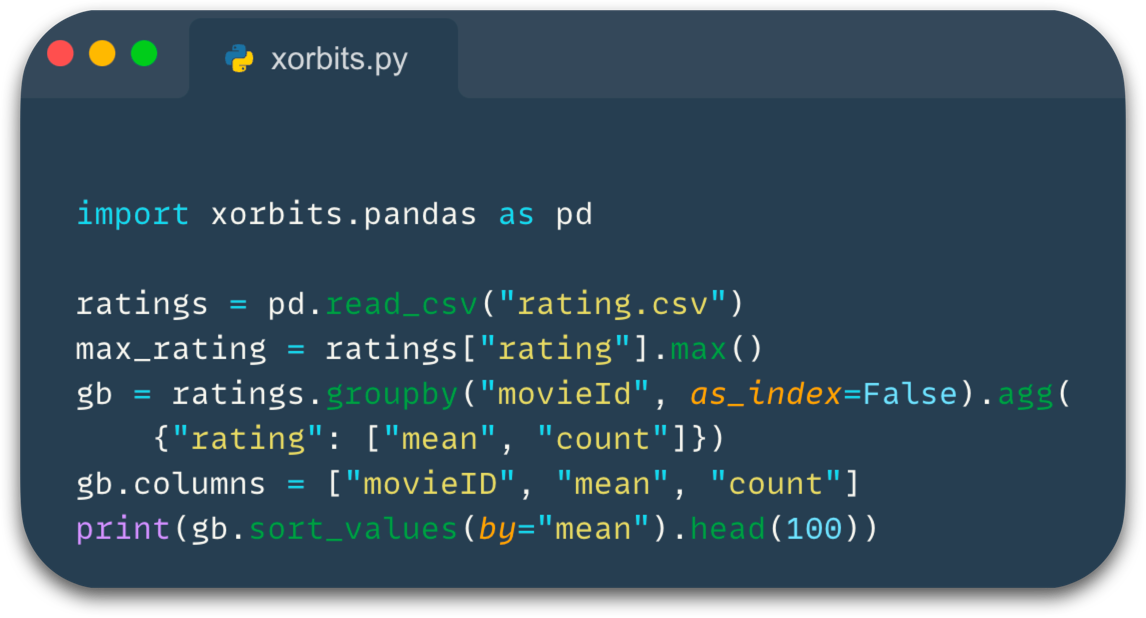 Not all variables are executed, Xorbits will only execute the last operation head and print it, the variable max_rating will not be computed because it has no relation to the final result, and all intermediate variables will not be stored either. Deferred execution can greatly improve performance and reduce memory usage without changing user’s code. More information can be found in the documentation at here.

How does Xorbits parallelize computation

Although Xorbits behaves like Numpy or Pandas, the implementations behind the APIs are rewritten in parallel manners.

Let’s take a look at how this code runs in Xorbits. 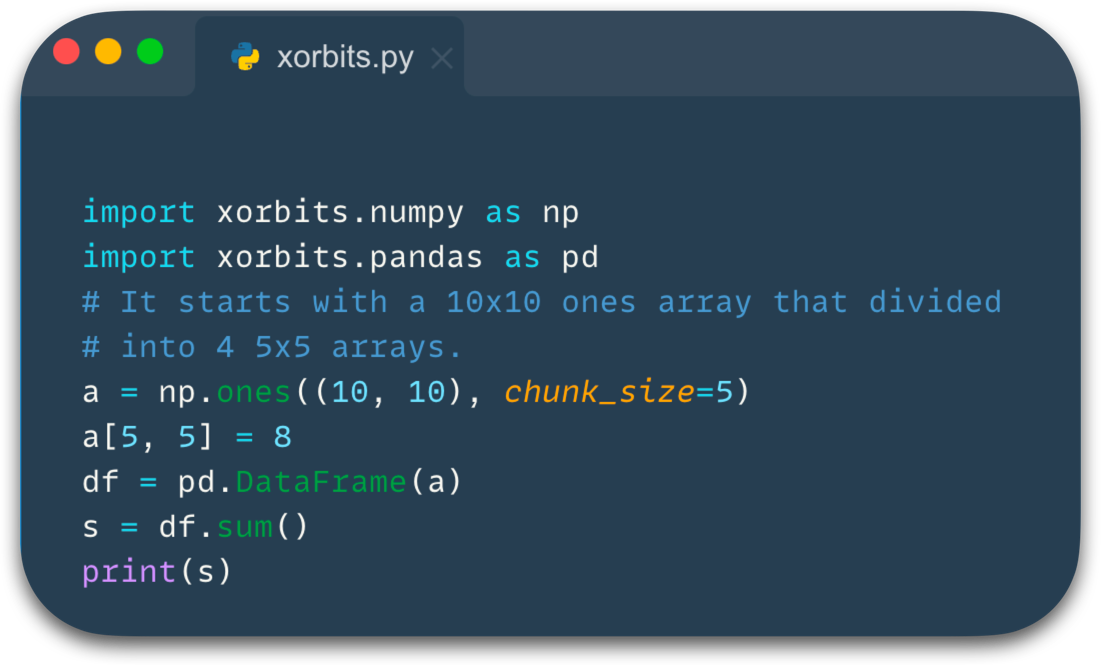 When you call a function, Xorbits builds a computation graph in the background, with each function corresponding to different operators. 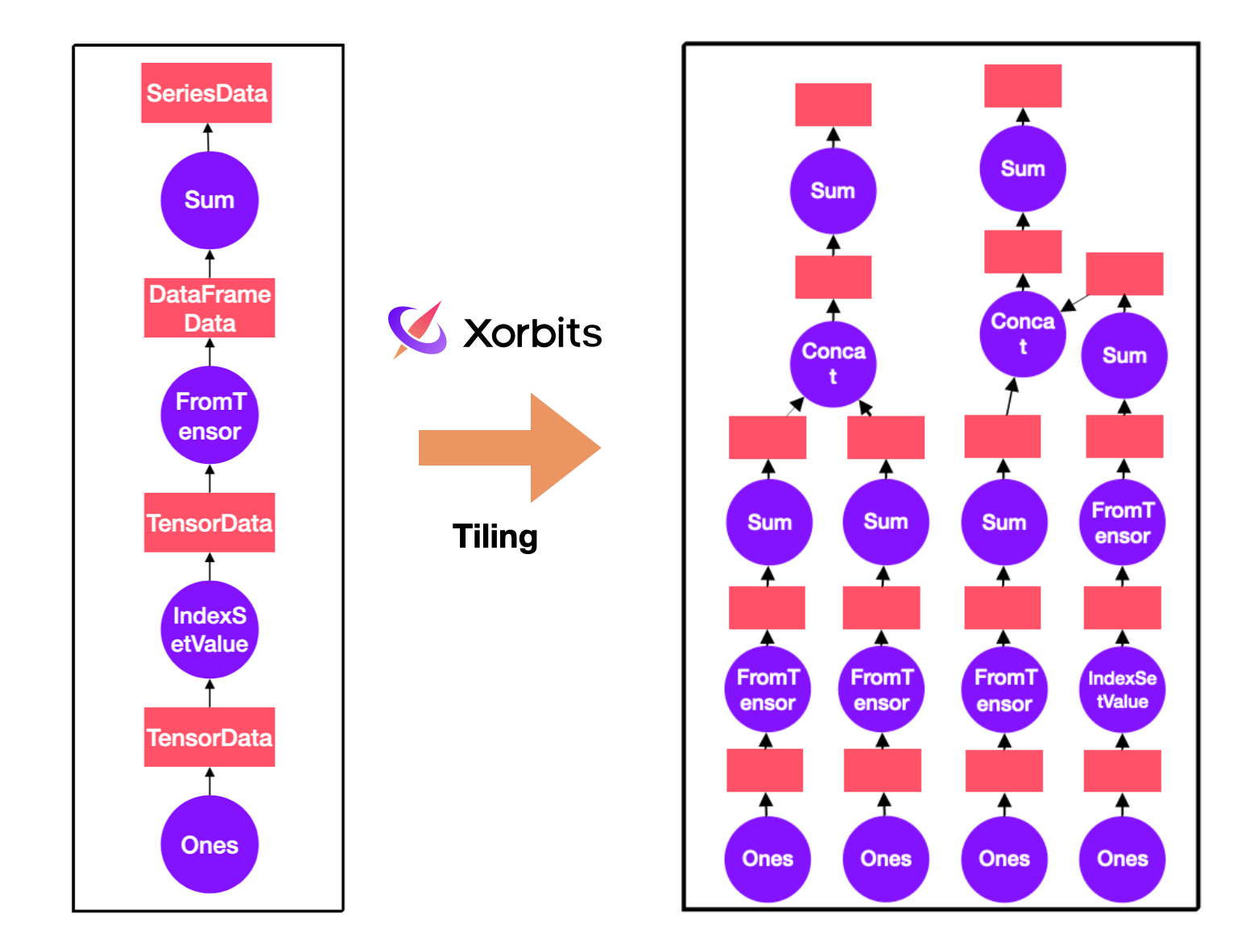 Looking at the fine-grained graph on the right, you can notice that operators like “setvalues” only affects a subset of data, and only appear in the computation flow of one of the chunks during tiling.

After the fine-grained graph is generated, Xorbits will divide it into multiple sub-graphs, each sub-graph contains multiple chunks, the sub-graphs become the smallest unit of scheduling, and the next step is to distribute these sub-tasks to each worker. Xorbits takes several factors into consideration during scheduling. Firstly, Xorbits adopts a depth-first strategy, it can release intermediate results as early as possible and reduce memory usage during the computation. Secondly, Xorbits schedules based on locality to minimize data transfer between the workers. For some special operators, Xorbits can also accept some customized scheduling policies. These ensure Xorbits can perform the computation in the most optimal way possible.

This animation shows the complete flow of execution in Xorbits, the details will be introduced in the next section or the following series of articles.

Why is Xorbits so fast

Xorbits performs well in benchmarks. In addition to the parallelism and scheduling strategies mentioned above, Xorbits has made a lot of optimizations throughout the entire execution process. These optimizations enable us to lead other frameworks.

Based on the computation graph, Xorbits can perform some optimizations on the execution plan before actual computation. A series of optimization rules such as column pruning, predicate pushing and operator fusion can make the computation faster and use less memory. Before tiling, Xorbits optimizer will try to optimize the coarse-grained graph, such optimization will have a significant benefit on large-scale datasets.

Dynamic column pruning is one of the most effective optimizations. Xorbits optimizer will keep the columns that each operator depends on, when it encounters operators such as join, groupby, and others that may cause a large amount of data exchange or datasource operators such as read_csv, read_parquet, the optimizer will prune the unnecessary columns, in some scenarios the amount of computation can be reduced by an order of magnitude.

By traversing backwards from the final operator “groupby” and using the information recorded by the optimizer, it can be determined that only the “column_a” and “column_b” columns are needed for the final result. So it will only read these two columns from the file, which can reduce memory usage and computation time, even if it can not push down to the datasource operator, it also reduces the amount of data in intermediate steps.

In addition to optimizing the execution plan, graph fusion is also a very important step. When dealing with large amounts of data, the generated fine-grained graph’s nodes will be very numerous and the topological structure of the graph will become very complex. At this point, graph fusion can simplify the problem and make it more efficient.

Xorbits proposes a fusion algorithm based on coloring. First, assign different initial colors to the nodes according to the bands that assigned by assigner, then propagate the colors through both a forward and backward traversal. Finally, merge the nodes with the same color into a single subgraph. 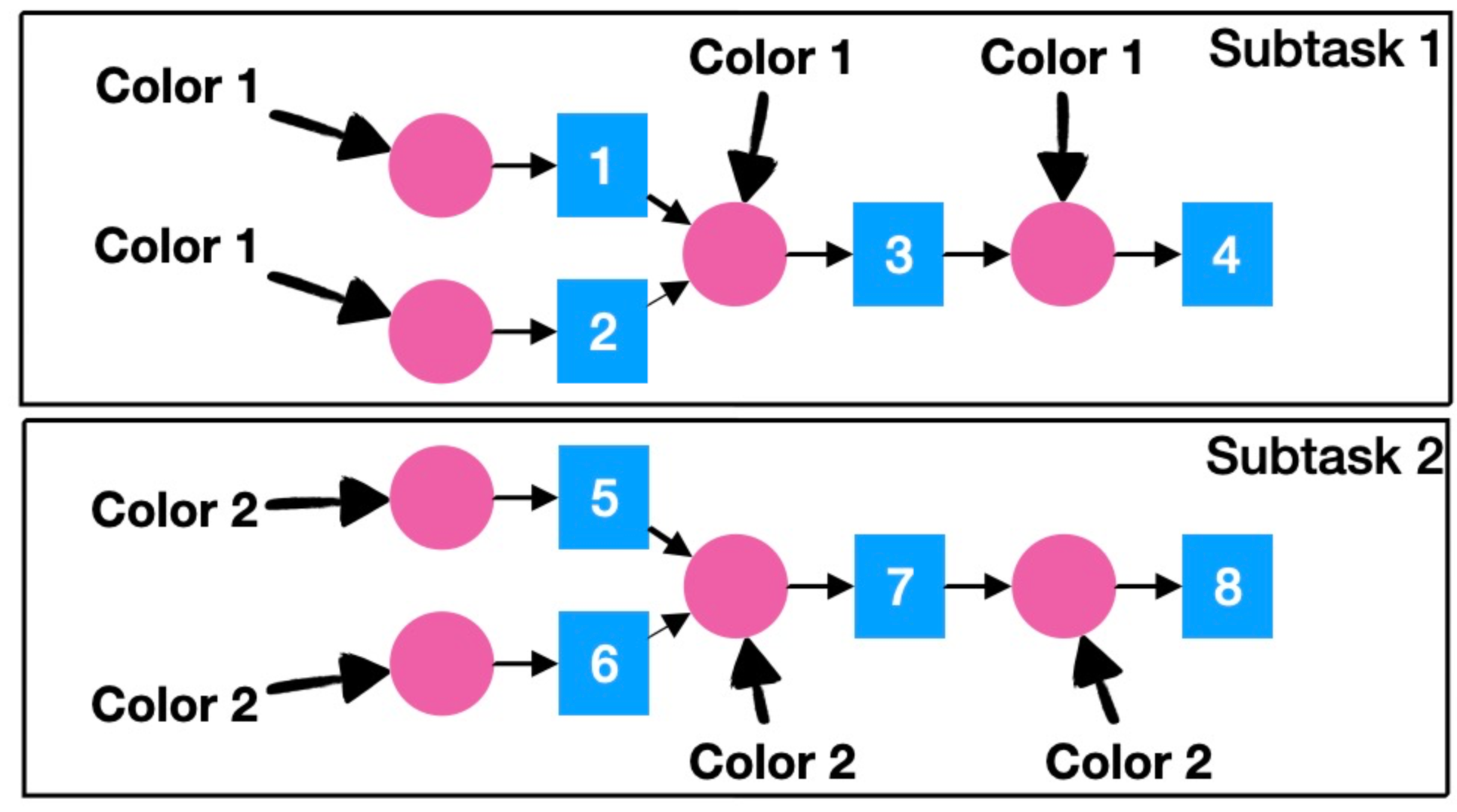 Propagating in reverse topological order does not affect the color of the nodes.

Finally, the entire graph is only colored with two colors, and nodes with the same color can be fused, resulting in two subtasks. Graph fusion not only reduces scheduling overhead, but also provides more possibilities for runtime optimization.

Iterative tiling and others

In addition to the above optimizations, Xorbits has made efforts in various aspects. Iterative tiling allows Xorbits to have an adaptive tiling strategy, making tiling more flexible and intelligent, allowing Xorbits to dynamically adjust the data partitioning based on the runtime load. Support for arrow dtype allows Xorbits to have an advantage in handling strings. Xorbits can utilize GPU acceleration for data processing and is also trying to optimize communication overhead. All of these make Xorbits stand out among these data science libraries, making it the best choice for your data analysis.

I hope this blog has given you a basic understanding of Xorbits, the following articles in this series will delve deeper into the implementation details of each component. If it has inspired you, getting started and having fun!